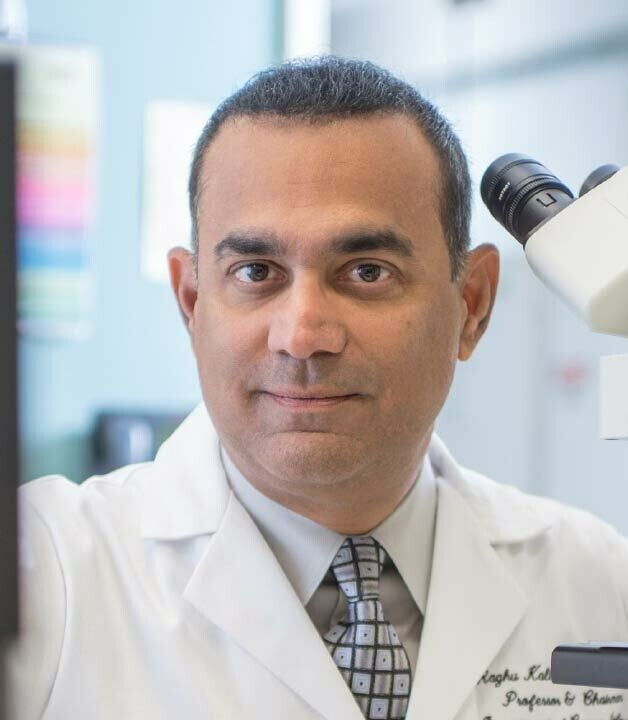 Raghu Kalluri was born in St. Louis, Missouri and received his B.S. in Chemistry and Genetics. He received his Ph.D. in Biochemistry and Molecular Biology from the University of Kansas Medical Center and his M.D. degree from Brown University Medical School. Dr. Kalluri was a postdoctoral fellow and a research associate at the University of Pennsylvania Medical School and performed research in areas of tissue injury/repair and regeneration. In 1997 Dr. Kalluri moved to Harvard Medical School as an Assistant Professor of Medicine and as a faculty based in the Department of Medicine at the Beth Israel Deaconess Medical Center. In 2000 he was named Associate Professor and the Director of the Center for Matrix Biology, where in 2006 this program became the Division of Matrix Biology and Dr. Kalluri was appointed the Chief of the Division and also appointed as Professor of Medicine at Harvard Medical School. He held appointments in the Department of Biological Chemistry and Molecular Pharmacology at HMS, Harvard MIT Division of Health Sciences and Technology, Harvard Stem Cell Institute, and was a research fellow of the HMS Peabody Society. In 2012 Dr. Kalluri moved to The University of Texas MD Anderson Cancer Center as Professor and Chairman of the Department of Cancer Biology and the Director of the Metastasis Research Center. Dr. Kalluri currently holds the Olla S. Stribling Distinguished Chair for Cancer Research. Dr. Kalluri recently received the Jacob Henle Medal from the Georg-August University in Germany to honor his discoveries related to tissue damage and regeneration, and cancer biology. He is the recipient of several mentorship and teaching awards from the Beth Israel Deaconess Medical Center, Harvard Medical School and MD Anderson Cancer Center. He is also the recipient of several research excellence awards for his work on tissue damage/regeneration and cancer progression. He is the fellow of American Society of Clinical Investigation and the American Association for the Advancement of Science. Dr. Kalluri has published over 297 peer-reviewed manuscripts. Dr. Kalluri has an h-index of 110 with 63,978 life time citations (since 2014, H index: 78 and 35,000 citations). Additionally, Dr. Kalluri is ranked in the 0.01% (ranked 659) of about 6.8 million scientists (covering 22 scientific fields) in the world for citation impact. Dr. Kalluri has trained 88 postdoctoral fellows, 15 graduate students, and 63 undergraduate students, and 58 of his trainees hold academic positions around the world. At MD Anderson Dr. Kalluri teaches 1st year core courses for graduate students and medical students. He serves on science and health advisory panels in the USA and European Union, and on the editorial boards of several academic journals representing biology and medicine. Dr. Kalluri is a consulting editor of the Journal of Clinical Investigation and is the Deputy Editor of Cancer Research. Dr. Kalluri’s research had led to seminal discoveries in the area of tissue injury/regeneration, exosomes biology, cancer biology, and cancer metastasis. Dr. Kalluri’s work led several issued patents. Dr. Kalluri serves as an advisor to several biotechnology and pharmaceutical companies, and has co-founded five biotechnology companies. Currently, Dr. Kalluri’s research laboratory is broadly interested in the study of cell and tissue microenvironment and its impact on cancer progression and metastasis.